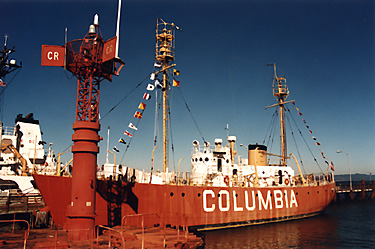 “The Lightship Columbia was commissioned in 1950 as Light Vessel No. 604, and was built by the Rice Brothers Shipyard in Boothbay, Maine. She first took her position at the important Columbia station just outside the Columbia River Bar and southwest of Cape Disappointment, Washington in 1951. This was the last lightship on the Pacific coast, and she spent her entire career at this one site. Decommissioned in 1979, she was replaced by a lighted horn buoy (seen sitting next to the lightship in photo). It is now moored on the Astoria waterfront, and is the centerpiece of the Columbia River Maritime Museum.

Columbia is 128 feet long with a beam of 30 feet, a draft of 11 feet and a displacement of 617 tons. The foremast carried a 500-millimeter lens lantern until 1964 when the Coast Guard changed it to a modern high-intensity light. She also carried twin diaphone fog signals.”