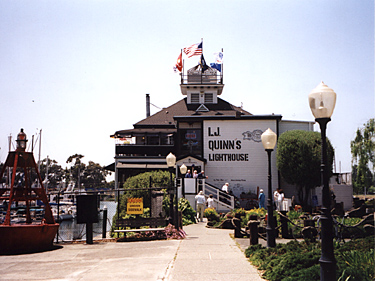 “This light was the second one to mark the entrance to Oakland harbor, having replaced a much smaller lighthouse that had been built in 1890. In this white, two-story building the lower story contained the storerooms, and the keepers and their families lived above. At the top where the four-sided roofs converge, there is a short tower and lantern room. After it was discontinued in 1966 the building was sold to a restaurant firm and barged up the estuary to its present location. It is now operated as L.J. Quinn’s Lighthouse restaurant.”