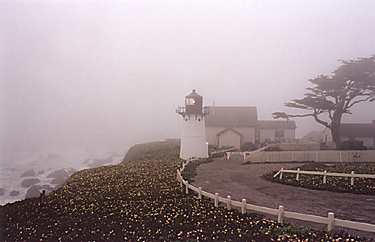 “Located about 20 miles south of San Francisco, point Montara is a southern spur of Montara mountain which terminates in 60 foot cliffs with numerous out lying rocks. These rocks were especially hazardous to early mariners in bad weather as they sailed close to the coast approaching the Golden Gate. A fog signal station was first established here in 1875 and the first light wasn’t established until 1900. The first light consisted of a red lens lantern hung on a post. In 1912 a fourth-order Fresnel lens was installed in a wooden skeleton tower. The present cast iron, 30 foot tall tower was built to hold the Fresnel lens in 1928. Today, a small modern lens shines from the tower and the station is part of the Golden Gate National Recreation Area.”