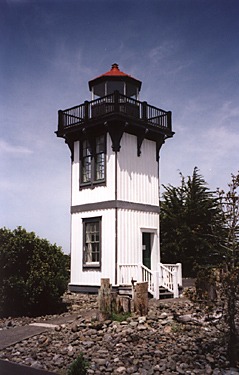 “Originally located on Table Bluff at the south side of the entrance to Humboldt Bay along California’s northern coast, this 35 foot tower, which was attached to a two-story, Victorian keeper’s dwelling, replaced the 1856 lighthouse which sat on the bay’s North Spit. It was moved to its present location by Ray Glavich and other volunteers sometime after it was abandoned in 1975. It has been beautifully restored and sits in the Woodley Island Marina for all to enjoy.”