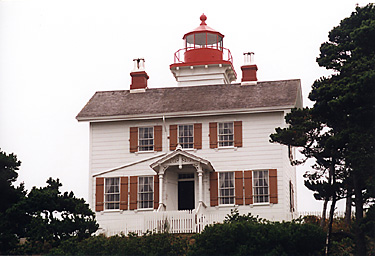 “This light sits on the crest of a hill at the north entrance of Yaquina Bay in Yaquina Bay State Park. The square wood tower which rises from the back elevation of a two-story wood dwelling, housed a fifth-order Fresnel lens that was 161 feet above sea level. This light was taken out of service when the nearby Yaquina Head Light was activated. After remaining unused for a number of years, the building served as living quarters for the Army Corp of Engineers, and as quarters for U.S. Lifesaving Service crews. The U.S.L.S.S. eventually became the U.S. Coast Guard. The light was acquired by the State of Oregon in 1933 and it was scheduled for demolition. Local residents formed the Lincoln County Historical Society and successfully preserved the light, and have operated a museum in the lighthouse since 1965. The building was restored in the mid-1970’s. It was relit in 1996 and is operated as a private aid to navigation by the Coast Guard.”