Isle of May Main Light 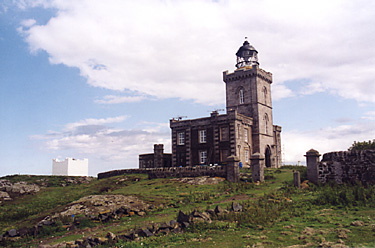 “This light is located on an island 5 miles off the southeast coast of Scotland at the entrance to the Firth of Forth. It is the upper (rear) light of a pair of leading lights (range lights). Castle-like in structure, the tower stands 79 feet tall and is visible for 26 nautical miles. It replaced the original light tower, built in 1636, which had been the first permanently-manned lighthouse in Scotland. The remains of the original tower (the upper part was removed when the new tower was built) can be seen at the left in the photo. The island is now recognized as an important seabird research center. It was also an important religious center until the 16th century. It housed a 12th century priory and the ruins of the Chapel of St. Aidan can still be seen there. This light is still active today.”