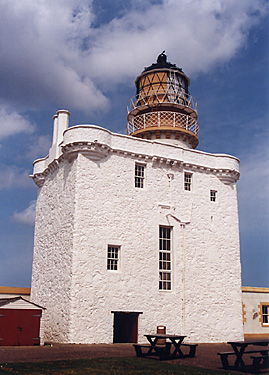 “Originally designed by Thomas Smith, this lighthouse was built on top of a previously existing 16th century fortified castle. The tower is 33 feet tall giving it an overall height of 82 feet. The light has a nominal range of 22 nautical miles. It is located on the north of Fraserburgh Harbor along the northeast coast of Scotland. In 1824 the lighthouse was reconstructed inside the castle by Robert Stevenson. Then in 1851 his son, Alan Stevenson, improved and developed the light and lighthouse keeper’s cottages. This was the very first lighthouse to be built by the newly created (in 1786) Northern Lighthouse Board. It is currently the site of the Museum of Scottish Lighthouses.”