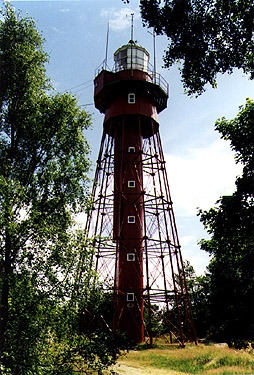 “This 30 m (98 ft) tall steel tower is situated on the southeast corner of the Skane province. It was the first Swedish lighthouse built of steel. Earlier lights were all built of stone. This site was originally equipped with a twin lighthouse. The upper light was discontinued in 1894 and moved to a new location in northern Sweden, where it was relit in 1904 as Rönnskär Lighthouse.”