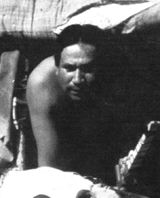 Leonard Crow Dog was the spiritual leader of the American Indian Movement of the 1960’s and 1970’s and served time in prison as a result of his political activities. He was born in 1942 on the Rosebud Reservation. His book Four Generations of Sioux Medicine Men describes the history of four generations of his family from the time of Sitting Bull and Crazy Horse through Buffalo Bill Cody’s Wild West Shows to Native people’s struggles today.