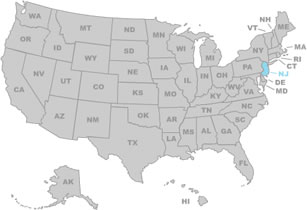 One of the original 13 states, New Jersey was named for the island of Jersey in the English Channel. Starting around 10,000 years ago, the Delaware Indians were the first people to inhabit the land now known as New Jersey. The first Europeans, mainly Swedes, Finns and the Dutch, started exploring the region in the 16th century and set up small trading colonies and settlements in what are the present-day towns of Hoboken and Jersey City. The British took control of the land a century later and sold it at low prices to settlers who were allowed a great deal of religious and political liberty. As a result, New Jersey has a greater degree of ethnic, cultural and religious diversity than many other former colonies. The state of New Jersey played an important role during the Revolutionary War, primarily due to its strategic location between British-occupied New York City and the rebel capital of Philadelphia. The state was repeatedly invaded by the British and more than 100 large and small battles, including the decisive Battle of Trenton, were fought between the ruling British and rebel Americans. It is no surprise that New Jersey has been christened the “Crossroads of the American Revolution.” In 1787, New Jersey became the third state to endorse the US Constitution and in 1790, the first one to sign the Bill of Rights. During the early 1800s, New Jersey experienced a wave of industrialization that led to the development of Camden, Newark, Elizabeth, Passaic and Jersey City as important manufacturing hubs. The construction of new canals and railroads helped the growth of industry. Thousands of Europeans migrated to New Jersey to work in the factories. Most of the state’s population and the industries that employed them were mainly concentrated in the northern part of the state. South New Jersey relied largely on agriculture, growing crops that provided food to nearby urban areas. The state has witnessed a number of historic moments since it first came into existence. It has also been home to many famous people, including scientist Albert Einstein, singer-songwriter Bruce Springsteen, actors Meryl Streep and John Travolta, singer-actor Frank Sinatra, President Grover Cleveland, poet Philip Roth, and many others. Today, New Jersey is a highly urbanized and populous state with one of the busiest and most extensive transportation systems in the world that funnels goods and people to New York City and other northern areas as well as to Philadelphia and other southern areas. It is renowned as the Garden State for the fertility of its land and is a leading producer of blueberries, cranberries and tomatoes. Its long and beautiful coastline has transformed the state into a popular tourist destination, with numerous resort towns including Atlantic City, Asbury Park and Cape May. Read on to discover more interesting facts about New Jersey.

Follow these links to read articles about New Jersey from Encyclopedias and Almanacs: