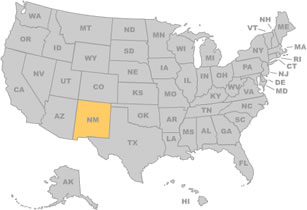 Javascript not enabled.
Return to Stately Knowledge Home
to navigate to other states.

The region of New Mexico has been inhabited for thousands of years. Its earliest inhabitants were the Anasazi and the Mogollon people – ancestors of the Pueblo and other Native American tribes. More recent inhabitants of New Mexico include Native American tribes, including the Apache, the Navajo and the Ute. The Spanish were the first Europeans to arrive in New Mexico in the 16th century in search of the fabled seven cities of gold. They never did find the gold but ended up colonizing the land on behalf of Spain.

The lucrative trade between New Mexico and the United States led to the establishment of the Santa Fe wagon trail, an important trade and migration route for people traveling west. The border dispute between Mexico and Texas was the cause of the Mexican-American war that eventually allowed the United States to gain control of a large part of New Mexico and make it a US territory in 1850. With the Gadsden Purchase the US acquired the entire region in 1853, though New Mexico did not become a US state until 1912. Union forces captured New Mexico from the Confederates during the Civil War. The same period saw the end of the Apache Wars and most other conflicts between the US Army and the Apache nations.

During the early and mid-1800s, New Mexico was part of what is known as the “Wild West.” This was the era of the western expansionist movement, when most of the land was open to raising livestock and homesteading. Local law and order were practically non-existent or rarely enforced and military presence was confined to a few parts of the region. New Mexico of the 1800s was a land of wide open spaces and beautiful blue skies, where buffalo hunters, railroad workers, cowboys, drifters, gamblers, outlaws, horse thieves and soldiers scrapped and eked out a precarious existence. Unsurprisingly, one of the most famous outlaws of 19th century America was New Mexico native Billy the Kid, who is buried in Fort Sumner. The Wild West culture and cowboy attitude of the region is rooted in the values of individualism, hard work and a deep love of frontier life.

New Mexico became the 47th state of the United States in 1912. Because of its remoteness and low population density, it was chosen as the site for the Manhattan Project that involved the development and testing of the first atomic bomb during World War 2.

Although the unruly days of the Wild West are long past, the legendary mystique remains and can still be felt in the magnificent mountain communities, quirky desert towns and modern-day cities of New Mexico which showcase many aspects of cowboy culture.

Here’s a comprehensive list of interesting facts about New Mexico:

Follow these links to read articles about New Mexico from Encyclopedias and Almanacs: