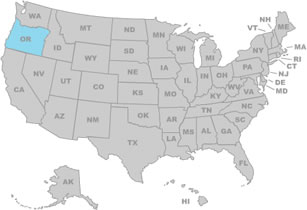 When the first Europeans arrived in the 16th century in the region now known as Oregon, it had been home to more than a hundred Native American tribes, including the Chinook, the Yamel, the Coos, the Bannock, and the Modoc. Spanish sailors first spotted the coastline of Oregon in the mid-16th century and included it in rough maps describing the region. A few years later, following the footsteps of the French and the Spanish, English explorer Sir Francis Drake landed there in search of Spanish loot. He was followed by British and American expeditions who charted the land and claimed it for their respective countries. The conflict between Britain and the United States was amicably resolved in 1818 when both countries divided the region between themselves and governed it jointly. During the 1830s and 40s, groups of pioneers from the east traversed the famous Oregon Trail as they made their way westwards. Over the next 20 years, hundreds of thousands of settlers migrated west, many of them choosing to settle in Oregon. The discovery of gold in the 1850s attracted more people to the region. Eventually, the British were greatly outnumbered by the Americans and most of the territory went to the United States via the Treaty of Oregon in 1846. This treaty gave part of the territory to the British, an area that ultimately became part of Canada. The Oregon Territory established in 1848 was a vast region that included the future states of Oregon, Idaho, Washington and parts of Montana. Oregon officially became the 33rd state of the Union in February 1859. In the 21st century, the state has a diversified and thriving economy and is a leader in aquaculture and bio-and high-technology manufacturing. With over 300 wineries, Oregon is also one of the country’s top producers of wine. Portland, Oregon’s largest cities, is considered to be one of the best cities of the United States in terms of quality of life. Other urban areas of the state such as Corvallis and Eugene have also experienced steady growth. The list below has many interesting facts about the State of Oregon. Read on to know more!

Follow these links to read articles about Oregon from Encyclopedias and Almanacs: