States in the US are all very different from each other. So, it comes as no surprise that they have very different population estimates. With growth in the form of natural births and inward migration (both domestic and foreign), and declines from deaths and outward migration, state populations are in a constant state of flux. As of July 2021, the population of the United States is over 331 million. 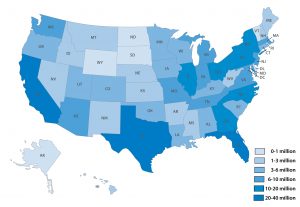 The United States Census Bureau’s population statistics encompass the 50 states, the District of Columbia and the five US territories, including Puerto Rico. The official Census takes into account the total number of people residing in the US, including citizens, permanent residents, and long-term visitors. Federal employees serving abroad, both civilian and military, as well as their dependents, are counted in their home state.

This population of the United States is unevenly distributed across all states and territories. The most populated states are California, Texas and Florida, while the states with the least population are Vermont and Wyoming.

The table below lists all US states ranked by population, from largest to smallest.

The United States is the third largest country in the world by area and ranks just behind Russia and Canada. All 50 states in the US vary drastically in area. The largest state is Alaska, which is more than 400 times larger than Rhode Island, the smallest state. In the US, a large area does not mean a large population. Texas, for example, is bigger than California, but the latter is more populous.
When it comes to size comparison, Alaska is staggeringly big; bigger than the next three largest states (Texas, California and Montana) combined, and twice the size of the second largest state, Texas. The smallest state – Rhode Island – could fit into Alaska nearly 486 times. And if Washington DC were a state, it would be the smallest.
The 10 largest states by area are Alaska, Texas, California, Montana, New Mexico, Arizona, Nevada, Colorado, Oregon and Wyoming. They are located west of the Mississippi River. The 7 smallest states – Massachusetts, Vermont, New Hampshire, New Jersey, Connecticut, Delaware, and Rhode Island – are among the 13 original colonies and are located in the northeast part of the country.
The table below lists all US states plus Washington, D.C. ranked by size, from biggest to smallest.

The population density of an area is the average measure of the number of people that occupy one square unit of that area. It is calculated for each state by dividing the population of that state by its land area.

The table ranks states in order of their population density in 2021, from highest to lowest.

Population Trends in the USA