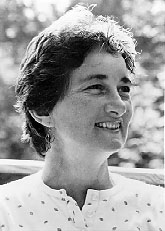 (Please note that the following profile was compiled by IPL staff who corresponded with this author in 1996. It has not been updated since. Those wishing to write to this author should not write to the IPL, as we do not have a way to contact her via e-mail. They should write her in care of her publisher at the following address: Clarion Books; 215 Park Ave. South; New York, NY; 10003. The address is also listed on her official web site at: http://www.terabithia.com/ )

My dream of becoming a movie star never came true, but I did a lot of acting all through school, and the first writing for which I got any applause consisted of plays I wrote for my sixth-grade friends to act out.

On the way to becoming a missionary, I spent a year teaching in a rural school in northern Virginia, where almost all of my children were like Jesse Aarons. I’ll never forget that wonderful class. A teacher I met at a meeting in Virginia recently told me that when she read BRIDGE TO TERABITHIA to her class, one of the girls told her that her mother had been in that Lovettsville sixth grade. I am very happy that those children, now grown-up with children of their own, know about the book. I hope that they can tell by reading it how much they meant to me.

After Lovettsville, I spent two years in graduate school in Richmond, Virginia, studying Bible and Christian education; then I went to Japan. My childhood dream was, of course, to be a missionary to China and eat Chinese food three times a day. But China was closed to Americans in 1957, and a Japanese friend urged me to go to Japan instead. If you’ve read my early books, you must know that I came to love Japan and feel very much at home there. I went to language school, and lived and worked in that country for four years. I had every intention of spending the rest of my life among the Japenese. But when I returned to the States for a year of study in New York, I met a young Presbyterian pastor who changed the direction of my life once again. We were married in 1962.

I suppose my life as a writer really began in 1964. The Presbyterian church asked me to write some curriculum materials for fifth and sixth graders. Since the church had given me a scholarship to study and work in Japan, I felt I owed them something for their money. So I began writing. By the time the books were published, I had moved three more times, acquired three children, and was hooked on writing. But I decided I didn’t want to write nonfiction. I wanted to write what I love to read–fiction. I didn’t know that wanting to write fiction and being able to write fiction were two quite separate things. In the cracks of time between feedings, diapering, cooking, reading aloud, walk-ing to the park, getting still another baby, and carpooling to nursery school, I wrote and wrote, and published practically nothing.

A friend in the church in Maryland, where we were living, felt sorry for me. There I was, four babies in just over four years (two adopted and two home-made), trying to write but with no success. So she decided to take me to an adult education course in creative writing one night a week. Eventually the novel that I wrote in the course was published, and I had become a writer.

Do I like being a writer? I love it. I often tell my husband that it’s the only job I could hold now. I’m spoiled. I work at home in my own study, wearing whatever I please. I never have to call in sick. From time to time, I get to schools and other places where I meet delightful people who love books as much as I do.

But there are days when I wonder how on earth I got involved in this madness. Why, oh why, did I ever think I had anything to say that was worth putting down on paper? And there are those days when I have finished a book and can’t for the life of me believe I’ll ever have the wit or will to write another.

Eventually someone like Lyddie Worthen and her family come along, and I’ll spend a couple of wonderful years getting to know them and telling their story–LYDDIE. Then it all seems worth the struggle, and I know beyond any doubt that I am the most fortunate person in the world to have been given such work to do.

A group of questions about Bridge to Terabithia:

Some books by Katherine Paterson:
THE SIGN OF THE CHRYSANTHEMUM
OF NIGHTINGALES THAT WEEP
THE MASTER PUPPETEER
BRIDGE TO TERABITHIA
THE GREAT GILLY HOPKINS
JACOB HAVE I LOVED
REBELS OF THE HEAVENLY KINGDOM
COME SING, JIMMY JO
PARK’S QUEST
LYDDIE
FLIP-FLOP GIRL