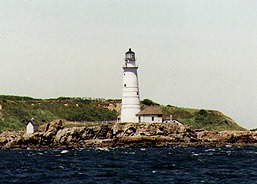 “Little Brewster Island (once called Beacon Island) is the site of the first lighthouse in the United States. The original masonry tower and keeper’s dwelling were constructed in 1716. At the beginning of the Revolution, to prevent the signal from benefiting British vessels, American troops removed the lamps from the lighthouse’s lantern. In 1776, as they evacuated Boston, the British blew up the tower. This current conical stone tower was completed in 1783 and was 75 feet tall. It was raised 14 feet in 1859 to its present height of 89 feet. This light, the country’s first, is also the last manned lighthouse in the United States.”