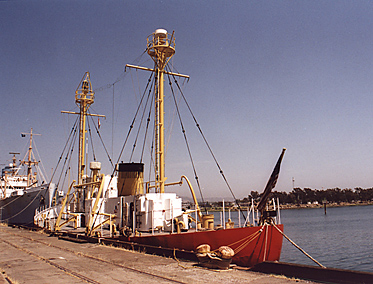 “The Lightship Relief was commissioned in 1951 as Light Vessel No. 605, and was built by the Rice Brothers Shipyard in Boothbay, Maine. She first went into service as Lightship Overfalls off Delaware until 1960 when she was transferrd to the Blunts reef station off Cape Mendocino, California. Then in 1969 she became Relief, relieving all west coast lightships when they left the station for overhaul. Decommissioned by the Coast Guard in 1975, she was given to the City of Olympia, Washington in 1976. The city sold the vessel to Mr. Alan Hosking of Woodside, California in 1979 and he donated the ship to the U.S. Lighthouse Society in 1986. Well over 10,000 hours have been spent restoring the vessel by Society members. The ship has many historical artifacts on board, and has been designated as a National Historic Landmark by the U.S. Department of the Interior.