The years spanning the end of the nineteenth century and the earliest part of the twentieth were a time of great expansion and development of, as well as a dramatic reaction to, the prevailing late Romanticism of previous years. In music, as in all the arts, expression became either overt (as in the early symphonic poems of Richard Strauss (1864-1949), the huge symphonies of Gustav Mahler, or the operas of Giacomo Puccini), or was merely suggested (as in the so-called “impressionist” music of Claude Debussy. The previous century’s tide of Nationalism found a twentieth century advocate in the Hungarian Béla Bartók.

It was a time of deepening psychological awareness, with the works of both Nietzsche and Freud in circulation; and the horrors of the First World War brought death and destruction to the very doorsteps of many people living in Europe. Possibly in reaction to such influences, the expressionistic music of Arnold Schoenberg and his disciples germinated and flourished for a time. Experimentation and new systems of writing music were attempted by avant-garde composers like Edgard Varèse and although none gained a foothold with the public, these techniques had a profound influence on many of the composers who were to follow.

Twentieth-century music has seen a great coming and going of various movements, among them post-romanticism, serialism and neo-classicism in the earlier years of the century, all of which were practiced at one time or another by Russian composer Igor Stravinsky. More recently, aleatory or “chance” music, neo-romanticism, and minimalism have been in vogue by a handful of American composers. With the commercial dissemination of music through the various media providing music as a constant background, the general populace has largely dismissed much of the music produced using bold, new, or experimental styles, preferring to turn to the forms and genres (and often the composers) with which it is most familiar. Many of the greatest and best-known composers of this century, including Russian composers Sergei Rachmaninoff, Sergei Prokofiev, and Dmitri Shostakovich, and British composer Benjamin Britten, have been those who have written music directly descended from the approved models of the past, while investing these forms with a style and modernistic tone of their own.

Continuing in the Italian operatic tradition of Verdi, Puccini is remembered for having composed several of the most popular operas in the standard repertoire. His works largely fall into the realm of verismo, or “realistic” opera, in which everyday characters live, love and suffer amidst contemporary settings. His works are noted for their gorgeous melodies, creative orchestration, and dramatic, even sentimental, plots. Puccini treats the orchestra as a continuous means of conveying the drama, with arias, duets and ensembles developing naturally out of the musical flow. Some of Puccini’s best-loved operas include Madama Butterfly, Tosca, and

La Bohéme. The love duet from Act I of La Bohéme is a fine example of Puccini’s rich melodic style. 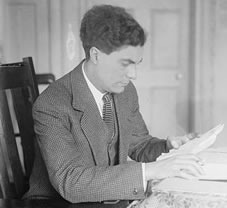 Although born in France, Varèse lived and worked most of his life in the United States. A pioneer of the avant-garde movement in music, Varèse experimented with electronic music, musique concré, and some highly original experimentation in the uses and organization of rhythm. The works for which he is best known are those in which he completely rejects traditional melody and harmony, instead building these compositions from blocks of sounds, relying on tone color, texture and rhythm. Varèse’s most original work exemplifying this technique is probably Ionisation, which is scored for a huge percussion ensemble, piano, and sirens.

Britten began his musical studies at an early age, and although his earliest works are mostly for instrumental forces, he is perhaps best known for his choral and vocal music, especially his operas. Much of his vocal music was composed for his life-long partner, the tenor Peter Pears, and their artistic collaboration is one of the greatest in music history. Britten’s musical idiom is largely in a post-romantic style, with liberal doses of pungent dissonances.

Britten’s greatest work is most likely his first opera, Peter Grimes, and the Four Sea Interludes are well-known. Premiered in 1945, it was with this work that Britten scored his first international triumph. The opera tells the story of a social outcast, the fisherman Grimes, who, suffering at the hands of an unsympathetic society and in attempting to find acceptance by that society, brings about his own tragic downfall. The theme of the individual against society is one that recurs in many of Britten’s operatic works.

A pacifist, Britten composed the War Requiem to express his hope that the world can lay war to rest. The work is comprised of a setting of the Catholic Mass, juxtaposed with nine poems by the English poet Wilfred Owen, a soldier killed during the last days of World War I. The Requiem is scored for chorus, orchestra, children’s chorus, chamber orchestra, and three vocal soloists. Britten’s intention was to have a Russian soprano singing the sections of the Latin Mass, while the English poems were to be sung by a British tenor and a German baritone.