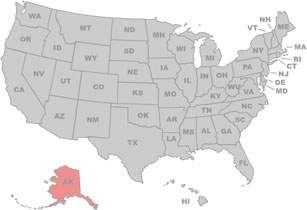 Alaska, the largest state (in terms of area) of the United States, lies at the extreme northwest of the continent of North America. It is flanked by the Arctic Ocean and the Beaufort Sea to the north; the Pacific Ocean and the Gulf of Alaska to the south; Canada’s British Columbia province and Yukon Territory to the east; by the Bering Sea and the Bering Strait to the west; and the Chukchi Sea to the northwest. Juneau, the capital of Alaska, lies in the panhandle region in the southeast.

The first inhabitants of Alaska came to the region approximately 13,000 years ago, from what is now known as Russia. It is speculated that they sailed or walked through a 600-mile-wide patch of land, known as the Bering Land Bridge, that connected Russia to Alaska. Many indigenous tribes including the Inuit, Haida, Yup’ik, Tlingit, Aleuts, Haida, and Athabascans still inhabit the region. The region was populated by Russian settlers from 1784 to 1867, when the United States purchased it at the rate of 2 cents an acre. The territory of Alaska was acquired by the United States in 1867 but was not admitted to the union until 1959. The purchase of Alaska from Russia was initially thought to be a huge mistake; many thought the harsh habitat was a bad buy that America would regret. Critics even called the territory “Seward’s Folly” after William Seward, U.S. Secretary of State who was primarily responsible for the purchase. The discovery of gold in 1872 turned the tide and enticed hordes of prospectors and settlers to Alaska and significantly enhanced the value of the land. Alaska became the 49th state to join the Union in 1959.

Follow these links to read articles about Alaska from Encyclopedias and Almanacs:

Some Famous People from Alaska

Visit here for more facts about other states.