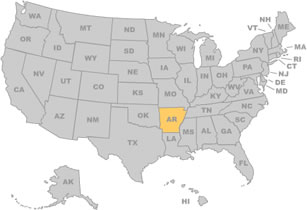 The history of Arkansas began millennia ago when it was populated by indigenous hunter-gatherers whose cultures grew and developed around 500 CE. Over time, it came to be inhabited by various Native American tribes such as the Quapaw, the Osage and the Caddo. The first Europeans started arriving in Arkansas in the 16th century but the first European settlement was only established a century later. The state got its name from early French explorers who derived it from the Quapaw word akakaze (which means “the land of people who live downstream.) In 1803, the United States purchased a large piece of land from France – a landmark event known as the Louisiana Purchase. The land of Arkansas was a part of this purchase. In 1836, the Territory of Arkansas was admitted as the 25th state of the Union. It seceded from the Union in 1861 due to its support of slavery but was re-admitted in 1868 after the end of the Civil War. In the 1950s, Arkansas was at the forefront of the Civil Rights Movement and strongly opposed desegregation. President Eisenhower had to send in US Army troops to enable the Little Rock Nine – nine African-American students – attend an all-white high school. But time has wrought many changes and today Arkansas is a thriving center of industry and a popular tourist destination with many beautiful forests and lakes. It also has a rich and unique culture that distinguishes it from other Southern states. It has a deep and long standing relationship with folk music and traditional arts and crafts. In recent years, the Democrat Governor of Arkansas, Bill Clinton was twice elected President of the United States. Below is a list of interesting and important facts about the state of Arkansas.

Follow these links to read articles about Arkansas from Encyclopedias and Almanacs: