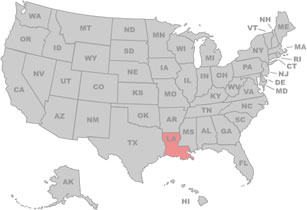 Javascript not enabled.
Return to Stately Knowledge Home
to navigate to other states.

The state of Louisiana is located in the Deep South at the mouth of the Mississippi River and shares its borders with Texas, Mississippi and Arkansas. For millennia, it has been home to numerous Native American tribes, including the Atakapa, the Choctaw, the Chitimacha, the Natchez and the Tunica. The region was colonized by the French in the early 18th century, and by the Spanish for a brief period, who later gave it back to the French at the end of the 18th century.

Louisiana became part of the United States in 1803 after the historic Louisiana purchase that nearly doubled the size of the country. It is reported that Thomas Jefferson, then President of the United States, had only wanted to buy New Orleans for its strategic and economic importance as a port but the French leader Napoleon Bonaparte insisted on selling the entire territory.

The state is home to Baton Rouge, the state capital and an important economic and educational hub of the American South, and to the historic port city of New Orleans, which is famous for its spectacular cuisine, jazz and for hosting the magnificent Mardi Gras festival every year.

Louisiana is home to a diverse array of cultures, the most prominent of which are the Creoles (peoples with a mixed Spanish, French, Caribbean, African and Indian background) and the Cajuns (descendants of French-speaking Acadians from Canada.) French colonists had also brought in a large number of slaves, most of them from the west coast of Africa, to work in the cotton and sugarcane plantations. This led to the development of a distinct West African culture in the Territory of Louisiana.

Louisiana was the 18th state to be admitted to the Union in 1812. During the Civil War, the state joined the other southern states in forming the Confederacy, but the capture of New Orleans by Union forces quickly led to its defeat and subsequent readmission into the Union in 1868. The state’s economy was destroyed during the Reconstruction but picked up with the discovery of oil and natural gas in the 20th century. Tourism has become an important industry in Louisiana, with New Orleans being a major draw, thanks to the charming French Quarter and the Mardi Gras festival, held annually since 1838.

The French, Spanish, African, and Native American influences are highly visible in the culture and discourse of Louisiana. Louisianians speak their own language, have a distinct style of music and a deliciously unique cuisine. The state has never had an official language and its constitution promotes “the right of the people to preserve, foster, and promote their respective historic, linguistic, and cultural origins.”

Want to know more about Louisiana? Here are some interesting facts about the Pelican State.

Follow these links to read articles about Louisiana from Encyclopedias and Almanacs: