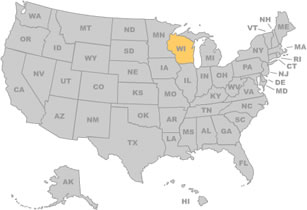 For thousands of years, the area now known as Wisconsin had been inhabited by Native American tribes – the Menominee, the Potawatomi, the Chippewa, the Oneida, and the Ho Chunk (Winnebago), among others, resided in the area until the 1800s. The first Europeans to arrive in the region were French explorers searching for the Northwest Passage to China in 1634. They enabled France to lay claim to Wisconsin as part of its New World territories in 1672. Soon there was an influx of English and French fur traders and missionaries who came via Canada in search of greener pastures. Increasing British presence in Wisconsin eventually led to a conflict of interests with France, resulting in the French and Indian War. Britain won the war and gradually gained control over a large part of French territory. By the end of the American Revolution, Wisconsin had become part of the United States. It was officially admitted to the Union as the 30th state in 1848 and remained a member of the Union during the Civil War. The state sent over 90,000 soldiers to fight for the North, although no major battles were fought on its territory. Before the Civil War put an end to slavery, Wisconsin had been an important stop on the Underground Railroad, with numerous slaves passing through on their quest to freedom in Canada. The state had a flourishing economy and attracted large numbers of settlers looking for work in its lumber, mining and dairy industries. In the 21st century, Wisconsin leads the nation in dairy production and is famous for manufacturing top quality cheddar cheese; so much so that Wisconsin residents sometimes call themselves “cheeseheads.” The state has produced its fair share of celebrities including magician Harry Houdini, architect Frank Lloyd Wright, painter Georgia O’Keeffe, US Army general Douglas MacArthur, actor Spencer Tracy, authors Thornton Wilder and Laura Ingalls Wilder, and newscaster Tom Snyder.

Follow these links to read articles about Wisconsin from Encyclopedias and Almanacs: