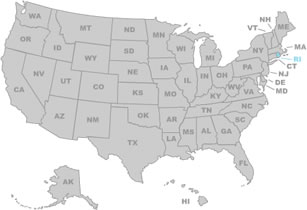 Located in the New England region of northeastern USA, Rhode Island is bordered by Massachusetts on the east and north, by Connecticut on the west, and by Rhode Island Sound and Block Island Sound of the Atlantic Ocean on the south. Despite being one of the smallest states in the US, Rhode Island is densely populated and has the distinction of being the “Ocean State,” with over 400 miles of beautiful coastline, featuring countless coves, bays and islands. It is also a densely populated and highly industrialized state for its size.

Native American tribes have inhabited the region since about 9500 BC. The Italian explorer Giovanni da Verrazano, acting on behalf of the French, was the first European to discover Rhode Island in 1524. The famous British explorer, Henry Hudson, bankrolled by the Dutch East India Company, followed him a few years later. When the first Europeans arrived in the early 16th century, they encountered the Wampanoag, Narragansett, and Niantic tribes. Some tribes were killed by diseases, likely contracted through contact with European settlers and explorers; others were wiped out through warfare with other tribes. The colony of Rhode Island was established by Roger Williams in 1636 to exemplify the noble principles of religious tolerance and the separation of church and state. Williams bought land from the Narragansett tribe after he was banished from the Massachusetts Bay Colony for his religious views. The state, however, did not derive its name from its founder. Instead, it was named by Adrian Block, a Dutch explorer who called it “Roodt Eylandt (red island) for the distinctive red clay found on its shores. The name was later anglicized under British rule. Rhode Island was the last of the original 13 colonies to attain statehood on May 29, 1790. The colonial period witnessed the rise of Newport as a major commercial hub in the region; Newport’s textile mills were largely responsible for pushing Rhode Island to the forefront of the Industrial Revolution.

Follow these links to read articles about Rhode Island from Encyclopedias and Almanacs:

Some Famous People from Rhode Island

Visit here for more facts about other states.