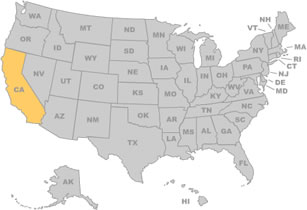 The third-largest and most populous state, California lies on the West Coast of the United States. It is surrounded by Oregon in the north, Nevada on the east, Arizona on the southeast and the Mexican state of Baja California on the south. A large state, its geography varies considerably, including coastline, forests, desert and mountains. At the same time, it is one of the country’s main agricultural centers.  California is also a major economic center, as the state, on its own, is the largest sub-national economy in the world. Home to Hollywood and the Silicon Valley, it has played a huge role in developing the culture of the USA as well as its technology.

The region of California was first settled by tribes that crossed over the Bering Strait from Asia about 13,000 years ago. The terrain of the area was such that it isolated the tribes in California from the others on the North American continent, and even from one another. To a large extent this eliminated conflict and warfare, allowing the population to grow and prosper. At the time the Europeans arrived, the indigenous population in the region was around 300,000. The Spanish were the first of the Europeans to reach and explore the region in the mid 1530’s. It is believed that California is named after a fictional island in a Spanish novel, ‘Las Serges de Esplandian’ by Garci Rodriguez de Montalvo that was popular at the time. Spanish colonization of the region was initially slow, but picked up after the Seven Years’ War (1756-1763), mainly through the establishment of military forts and mission churches around which the first pueblos (towns) in the region grew.  With Mexico’s independence in 1821, land grants were transferred to individual owners. At the same time, the Mexican government was able to exert little control over the area due to its remoteness. Foreigners (from the US and other countries) filtered easily into California and began to settle down.  1846 saw the short lived Bear Flag Revolt when American citizens in California declared an independent California Republic. A month later news of the Mexican-American War reached the rebels and they aligned themselves with the American army.  The War ended in California with the Cahuenga Capitulation in January 1847. It was an American victory.  Two years later, gold was discovered in the region near Sutter’s Fort by John Marshall, and this triggered the Gold Rush. People came from everywhere through every possible route. California had not yet been accepted into the Union, but had framed a state constitution in September 1849 and declared itself a free state (slavery was prohibited by law). A year later it became the 31st state to enter the Union.

Follow these links to read articles about California from Encyclopedias and Almanacs:

Some Famous People from California