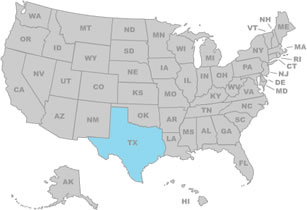 State History | Just the Facts | Encyclopedias & Almanacs | State Links | Did You Know | Some Famous People from this State | Related Resources Texas is the second largest state in the United States, and lies in the South Central region. It is a border state, sharing its southern and southwestern boundaries with Mexico. It also has a coastline along the Gulf of Mexico in the southeast. Within the US, it is surrounded by Louisiana in the east, Arkansas in the northeast, Oklahoma in the north, Arkansas in the northwest and New Mexico in the west. Texas is home to the United States’ fourth-largest city, Houston, while its capital city, Austin, is the second most populous state capital in the country.

Historians speculate that the region of Texas was first settled about 10,000 to 13,000 years ago by tribes who arrived from Asia during the Ice Age.  During the 1500s the Spanish were the first Europeans to reach and explore the region. They were often accompanied by missionaries who set up mission houses. The government however, did not move to actively settle and colonize the region until the 1600s. By then, strong trade routes had been established through Texas. A brief French attempt at acquiring sections of the region in the 1680’s drove the Spanish to ensure that their presence there was known and felt.  More concrete efforts at colonization came about in the 1730s, among them the establishment of the antecedent to modern-day San Antonio. Meanwhile, English colonies further north had declared independence and the United States was established. Americans then began their expansion westwards, a part of which was the Louisiana Purchase. The Purchase resulted in Spain’s North American colonies now sharing an international boundary with the new nation along Texas. This development brought more Anglo-American settlers and pioneers to the area. The political scene in Europe had also put Spain in a more vulnerable position. Its control over the region of Texas, in particular, began to weaken.  In 1821 Mexico declared its independence. The new administration allowed a greater volume of Anglo-American migration and settlement. However frictions arose concerning various matters such as religion and slavery.  Political chaos popped up often in the new republic, and in 1834 the dictator General Santa Anna came to power. Federalism began to be dismantled in Mexico, causing concern among Texans and provoking the Texas Revolution of 1835-36.  Several bloody clashes, including notable ones such as the Battle of the Alamo, ensued. The Revolution came to an end with the capture of Santa Anna in May. He signed treaties announcing the cessation of hostilities and the recognition of the independent Republic of Texas. Though the Texans voted for the Republic to be annexed by the United States, the US refused to do so. It was only in 1845 that the matter was finally settled when the presidential elections of the previous year were swept away by James K. Polk, the pro-expansion candidate.

Follow these links to read articles about Texas from Encyclopedias and Almanacs:

Some Famous People from Texas